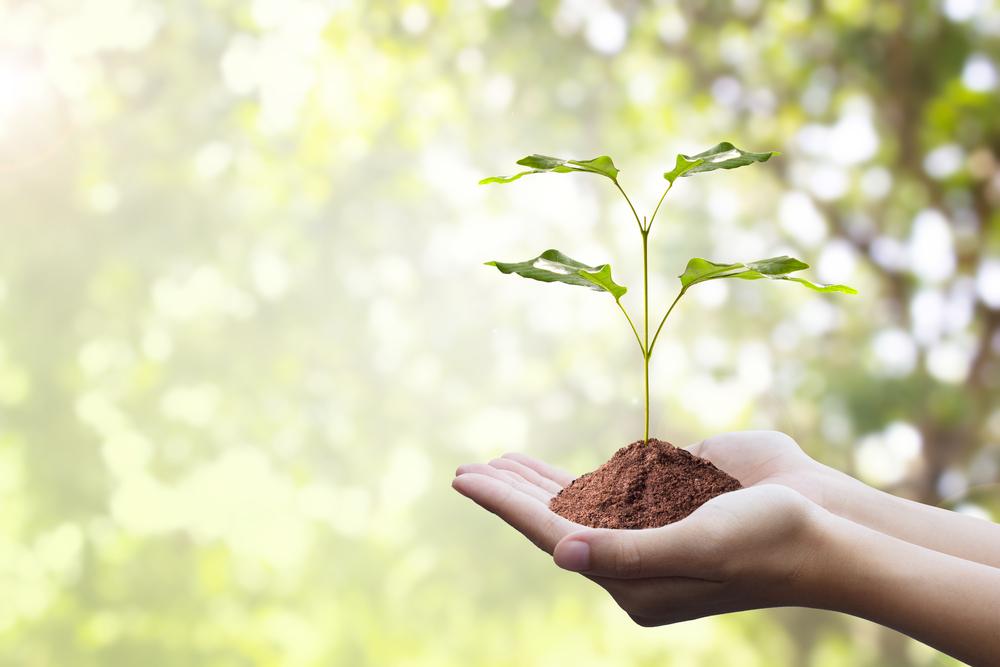 It's Now or Later

At one time or another, most people save money for something expensive—like a car or a home.  But the priciest thing most Americans ever buy—a comfortable retirement—is seldom seen as a big ticket item.  Although it's not often stated this way, people actually do "purchase" retirement in the future by saving today.  Having the discipline to save—and forego current spending—can make the difference between a comfortable retirement and an impoverished one.

Behavioral economists recognize that even though people want to save for old age, many have a difficult time following through with their good intentions.  As the 2005 Retirement Confidence Survey (RCS)[1] reported, approximately one-third of workers ages 35 and older are not currently saving at all, and 51% of workers over age 55 report having less than $50,000 in savings and investment (not including equity in their primary residence).  The drop in the U.S. personal savings rate from over 12% in the early 1980s to under 1% now is a reflection of the struggle Americans have saving to buy an adequate retirement.[2]

The Price Is Right

Americans should begin a savings program sooner rather than later, because the purchase price of retirement is rising, for several reasons.  First, while the average retirement age has ended its long-term decline and is currently stable at age 62, life expectancy continues to climb.  Today, a 65 year old American woman can expect to live to age 85, and a man to 82.  Thus, a typical retiree will spend almost 20 years drawing on savings.  Someone who begins working at age 23 and retires at age 65 will have 42 earning years during which to save for 20 years of retirement—resulting in a work-to-retirement ratio of 2.1, or just over 2 years to fund each year in retirement.  In 1950, the ratio was over 5 to 1, when the typical person worked from age 20 to 67 and lived to age 76.  With continued medical advances people will live longer, and unless the retirement age rises to keep pace,[3] the work-to-retirement ratio will drop further-- pushing the price of a comfortable retirement higher.

Finally, there is a trend toward employees having to shoulder a greater portion of their retirement saving, as employers terminate defined-benefit programs and offer defined-contribution (e.g., 401k) plans instead.  Placing this responsibility on workers clearly increases their need to save.

Look After Your Own Nest Egg

The third question has been addressed in two previous commentaries on our website.  In The Adaptive 5% Solution, we suggested that people consider an initial withdrawal rate of 5%, with adjustments up or down based on their portfolio value each January 1st.  Then, in Retirement Nest Eggs . . . Withdrawal Rates and Fund Sustainability, we examined the past 80 years of stock market and inflation history to determine the sustainability of various inflation-adjusted withdrawal rates.  If the future resembles the past, this analysis clarifies the probability of portfolio sustainability during a 20-year retirement.

But for some, particularly younger workers, those commentaries may have put the cart before the horse.  So now we'll investigate how to build your nest egg in the first place and offer some thoughts about what size nest egg can be considered adequate.

Adequate Yolk in Your Egg

One of the largest expenses to consider in determining an adequate size nest egg is a home mortgage.  Since the average American home is valued at over $250,000, it's not unreasonable to assume that many households incur an expense of about $1,300 per month in principal and interest.[4]   Retirees who have a home loan presumably need a higher income replacement percentage than those who don't.  However, retirees who invested funds instead of paying down a mortgage might have a larger nest egg capable of sustaining a greater replacement ratio in retirement along with a mortgage.

The RCS reported that about half of retirees surveyed currently spend at a rate exceeding 70% of their pre-retirement income.  Spending rates differ, not only across people as suggested above, but spending patterns fluctuate during retirement.  During the first 7 to 10 years, annual expenditures are about equal to a person's last working years. In the middle retirement years, expenditures often decline as older retirees become less active.  In the later years, chronic health problems often cause expenditures to rise once again.

Drawing on specific numbers, we can address two key questions: How much is enough, and how do you get there?

Consider a hypothetical example that you can adjust to match many situations.  Suppose that 80% of pre-retirement income is a reasonable replacement rate and that a typical college graduate starts working at age 23 earning a starting salary of $40,000.[5]  This person works continuously for 42 years and retires at age 65.  We anticipate that this worker's actual salary will rise not only due to productivity increases, assumed to be 1% per year,[6] but also due to inflation.  However, since wage increases intended to offset inflation don't increase actual spending power, let's complete all calculations as if inflation never occurred.  That is, in the calculations to follow, I treat all dollar figures in "real" (inflation-adjusted) terms.  Under these assumptions, this worker's real salary, growing at 1% per year, will rise from $40,000 to $60,752 by retirement.[7]

Assuming this retiree aims to replace 80% of pre-retirement income, I calculate the size of an adequate nest egg in Table 1 below.  The example includes Social Security and a modest pension [8] and assumes an annual 5% withdrawal rate over 20 years. 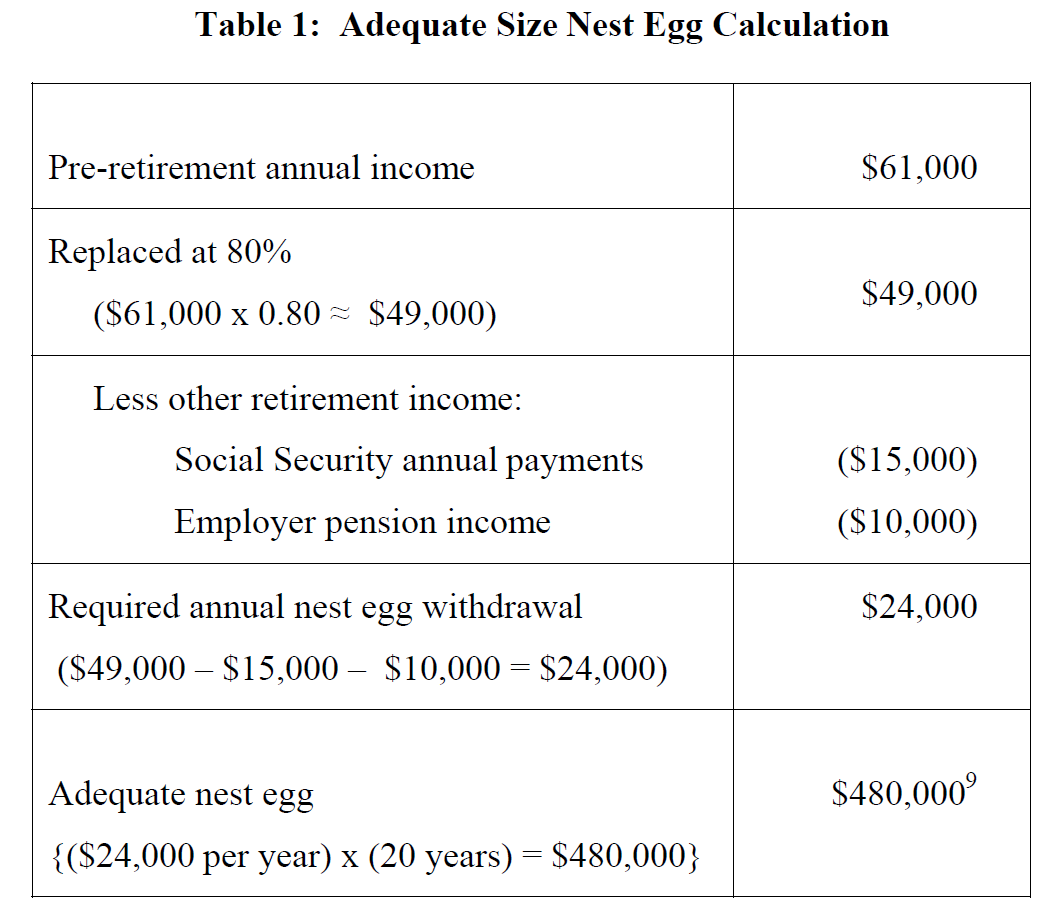 Show Me the Money

So how does the hypothetical worker save and invest to achieve the adequate size nest egg of approximately $480,000 in today's dollars?  Returning to the specific example, we can assume the following:

Under these parameters, the upper (blue) line in Figure 1 below indicates that the hypothetical worker reaches his objective of $480,000 in his early 60s—after saving and investing for about 39 years.  Note the importance of including equities in an investment portfolio.  Had the worker limited his portfolio to long-term U.S. government bonds, over the long run his return would have averaged about 5% nominal rate of return—the average since 1926.[10]  But, since inflation has averaged 3% over the past 80 years, the annual real rate of return would only have been about 2% and the worker would have fallen significantly short (as reflected by the pink line in Figure 1).  The 3% difference in the rates of return results in vastly different retirement situations—the investor who constructs a diversified portfolio emphasizing equities enters retirement more than twice as well off ($578,000 versus only $284,000).  No wonder Albert Einstein called the power of compounding one of the greatest wonders of all time! 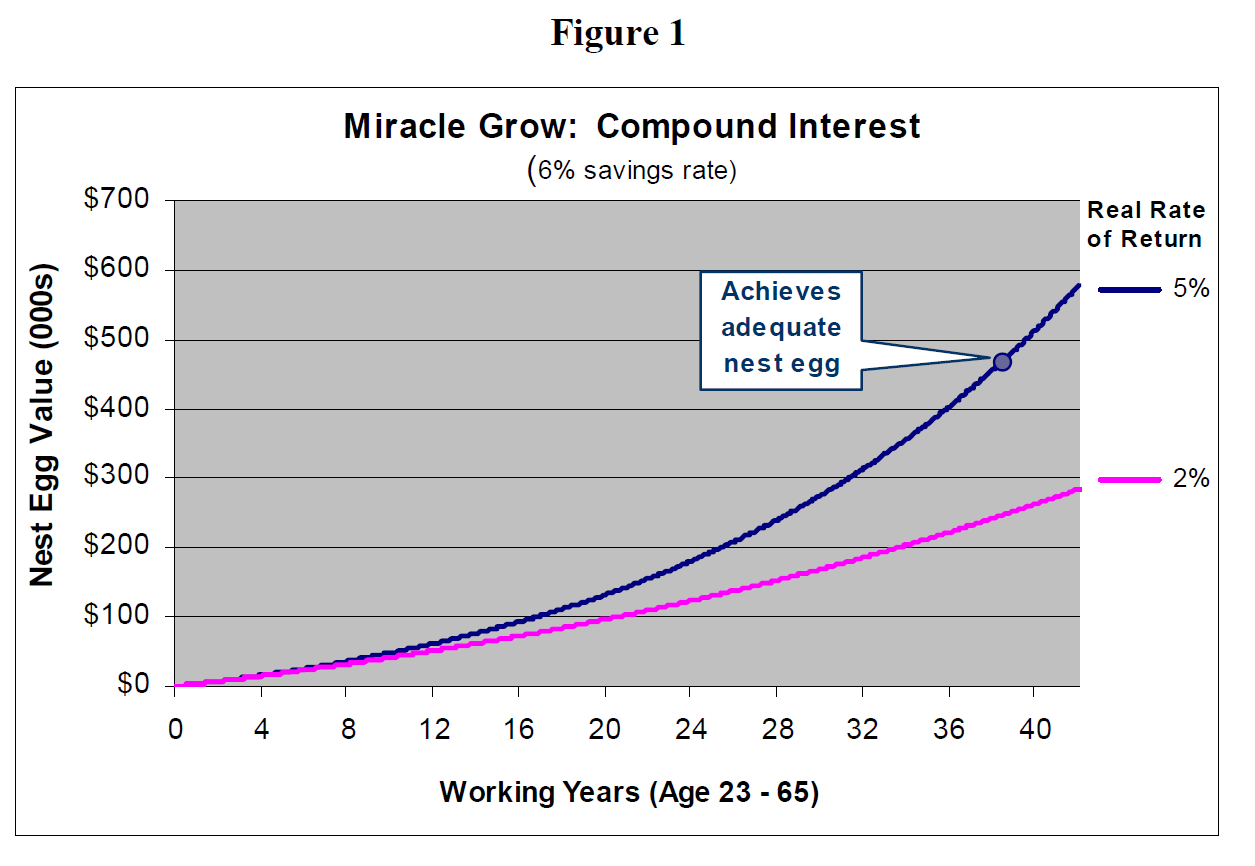 Due to the power of compounding, the earlier a program of saving and investment begins, the better.   As an example, consider two hypothetical workers—the Early Bird begins saving and investing in equities at age 23, as depicted in the example above and shown by the blue line in Figure 2.  Like many Americans, the Late Bird does not begin an investment program until age 33—waiting 10 years to get started--as reflected by the red line.  The Late Bird's nest egg grows to only $347,000, far short of adequate and well below the Early Bird's $578,000 portfolio.  Even if the Late Bird saves 9% (green line) instead of 6% for the remaining 32 years of his career, he is unable to catch up to the Early Bird, although he does (barely) acquire an adequate nest egg.  As you can see, the price of waiting 10 years to start saving for retirement is quite high.  Indeed the Early Bird gets the worm! 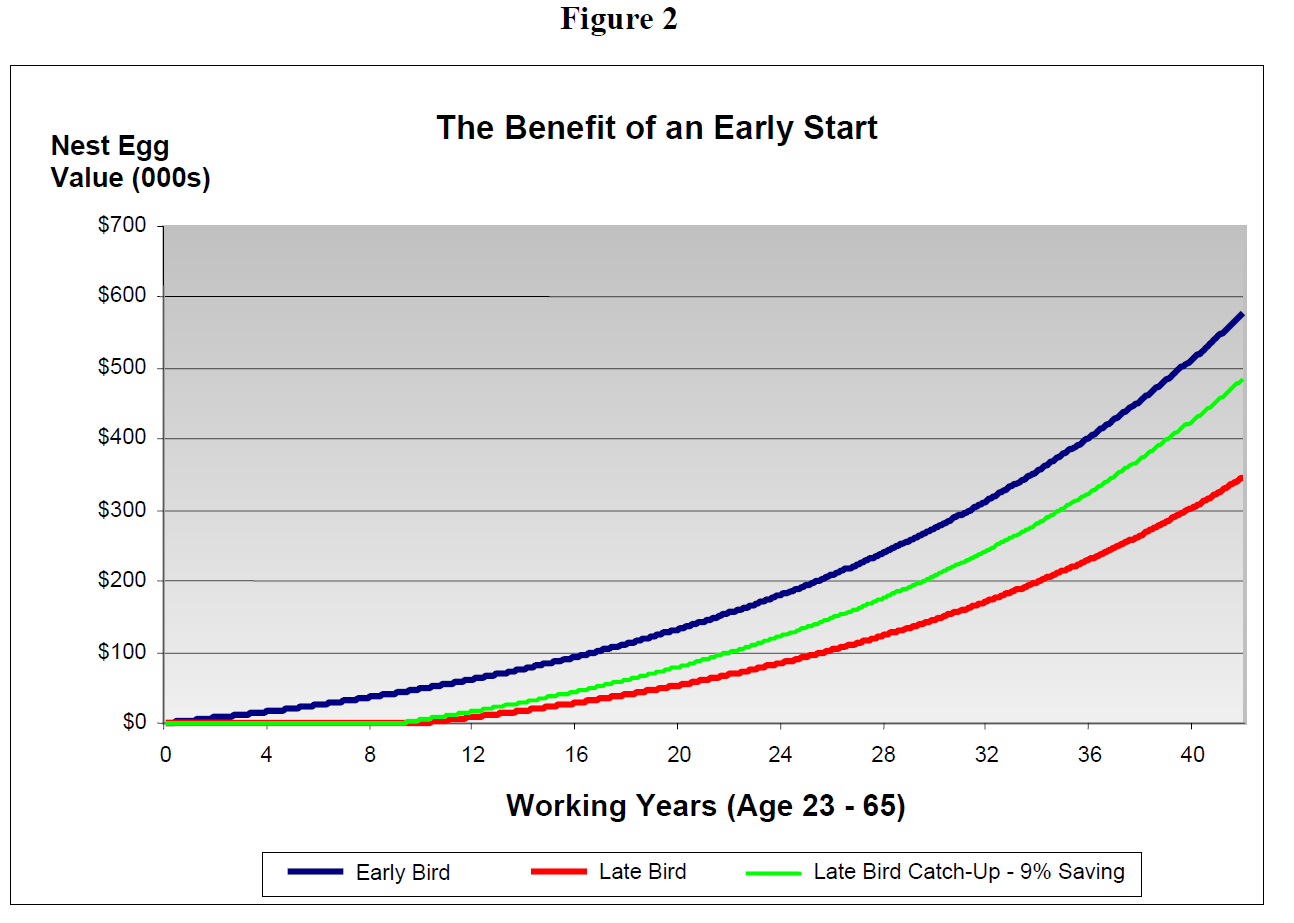 Save Early, Save Enough and Watch Your Return

The moral is clear.  The three most important steps to financial freedom in retirement are:

I caution readers, however, that few investors actually achieve the 5-6% real rates used in these examples.  Even though the S&P 500 averaged a 13.1% real annual rate of return during the 1984-2000 bull market, the average stock mutual fund investor achieved only a 2.1% annual real return.[11]  Experts observe that too often investors chase hot funds, forgetting that this year's star is often next year's dog.  Investors often end up buying high and selling low, substantially reducing their returns. 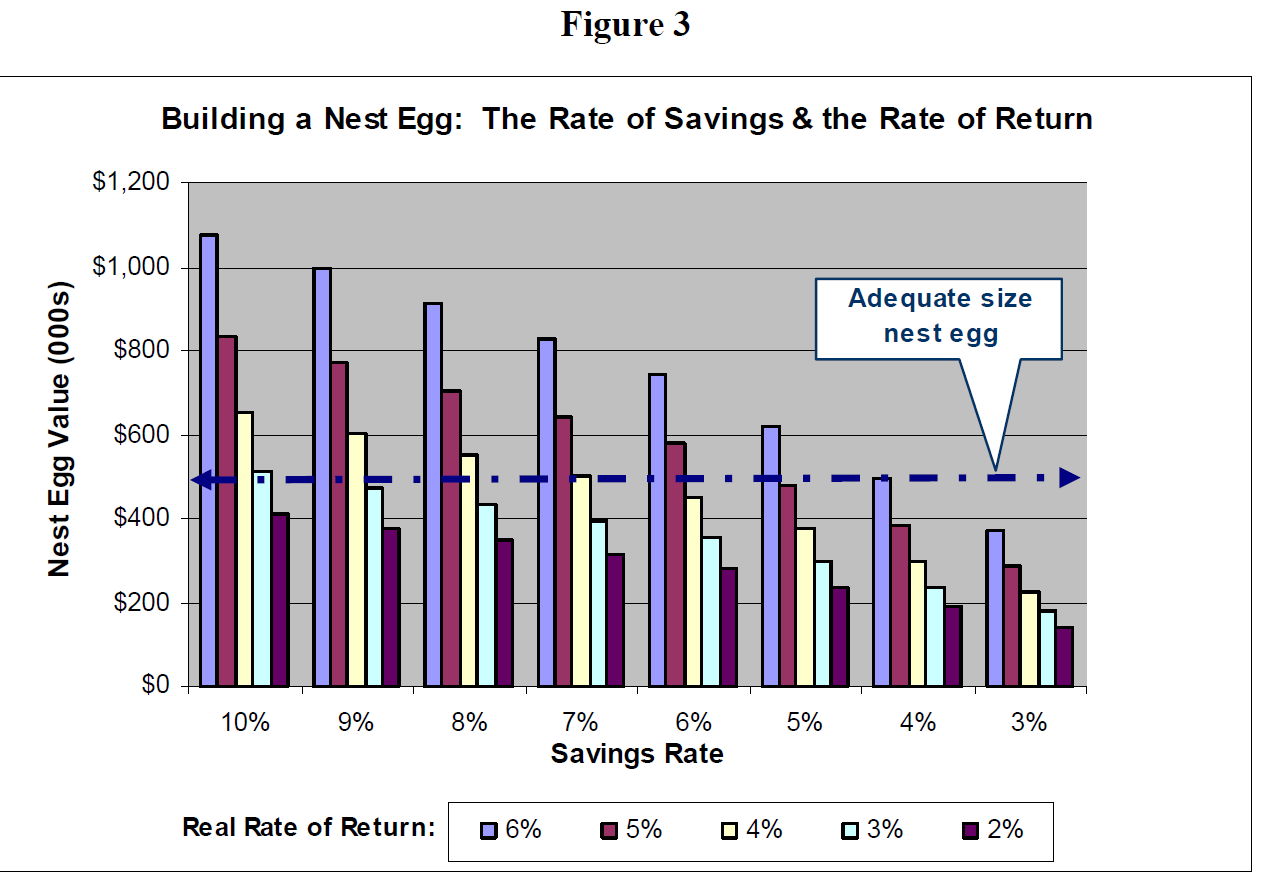 Most children love the story of The Little Engine That Could, because against all odds, the locomotive was able to climb a seemingly insurmountable mountain.  The same is true with financial goals—while they may appear unattainable in the beginning, disciplined saving and investment get the job done.

No two households face the same set of circumstances, and it's unlikely any individual situation matches the precise examples in this article.  However, the fundamental principles remain valid for purchasing any retirement—start early, save enough, and keep an eye on the rate of return.

[1] The RCS is an annual survey that has been conducted since 1994 by the Employee Benefit Research Institute and Mathew Greenwald & Associates.

[2] Home and investment portfolio appreciation are not included in personal savings; however, appreciation of such assets does represent an increase in one's wealth.

[3] According to the RCS, the average worker today plans to retire at age 65, so working longer may slow the decline in the work-to-retirement ratio and reduce the rate at which retirement costs swell.

[4] Mortgage payments vary dramatically depending on loan balance and interest rate.  The figure used in this paper is hypothetical.

[6] Over the long term, overall labor productivity has risen about 1-1.5% per year.

[8] Since fewer than half of retirees receive pension income, I have used a small figure in this example.

[9] Recall that this nest egg is expressed in real terms (today's dollars).  Without adjustment for inflation, the required nest egg would be almost $1.7 million in future dollars.  Depending on the nest egg's investment return, it would not necessarily be fully depleted over 20 years.

[10] If money market funds and certificates of deposit were included along with government bonds, the long-term average nominal rate of return would be about 4% instead of 5%.

[11] In nominal terms, the S&P averaged 16.3% over this period, while mutual fund investors averaged only a 5.3% annual return according to a study done by Dunbar, Inc.