Equity-Indexed Annuities - Look Before You Leap 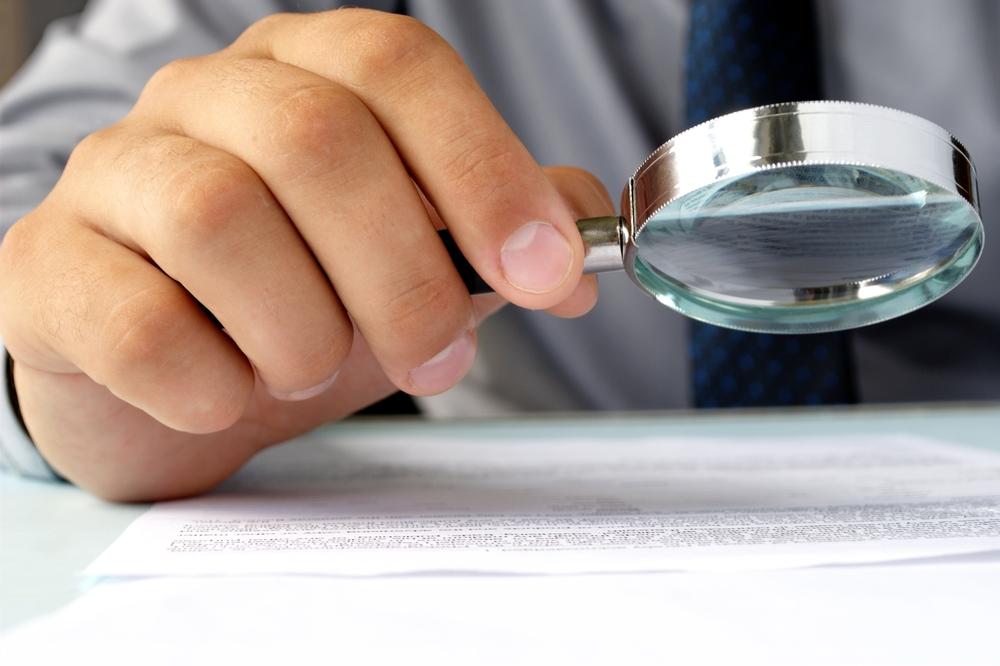 Does an equity‐indexed annuity (EIA) offer the elusive free lunch for investors by providing both protection of principal and meaningful investment growth at the same time? After all, EIAs are sometimes promoted by sales agents with the following seemingly persuasive pitch: Participate in the stock market’s upside while escaping its downside. Sounds like a free lunch to me! This pitch may appear attractive to some people who, having experienced the Great Recession and accompanying stock market drop, are still fearful of equities. Why not purchase an EIA to garner some fixed‐income stability and the superior growth of stocks? This may sound tempting, but investors should think twice before taking the plunge into an EIA.

In this study I compared the average annual return of a hypothetical equity‐indexed annuity  offering typical EIA features with two alternative portfolios invested in (i) the S&P 500 index, and (ii) U.S. Treasury bills. The results may surprise you: While the hypothetical EIA does reduce downside risk, it comes with a substantial opportunity cost in the form of a significantly lower return than stocks. The funds invested in my hypothetical EIA appeared to act more like a Treasury bill investment, with low volatility and low returns, than an equity investment with greater long‐run returns.

What is an Equity‐Indexed Annuity?

An EIA is typically a contract issued by an insurance company. The customer pays an amount of money (the premium) and in return the company promises to make periodic payments to the insured starting at some future date. (An insured can opt for immediate returns, but I considered a deferred‐returns policy.) The investment return of the EIA is based in part on the gain in the index to which the annuity is linked, usually the S&P 500. However, the method used to calculate the investment return can be quite complicated and varies widely among insurance companies. The Financial Industry Regulatory Authority (FINRA) noted that EIA products are:

Rather than attempting to address all the complexities and differences in the world of EIAs, in this study I created one hypothetical EIA that is representative of a typical equity‐indexed annuity product. The most common EIA features and the way in which I modeled them in this study are:

Given the equity‐indexed annuity provisions specified above, how did the EIA perform over the long run in comparison with the S&P 500 and with a portfolio invested in Treasury bills? While EIAs would not usually have 40‐year policy terms, in order to capture a long‐term record of relative performance, I computed a 40‐year return history: 1974 through 2013. As shown in the figure below, the EIA did reduce volatility of the portfolio, but it did so with a substantial reduction in the return on the portfolio compared to the S&P 500. 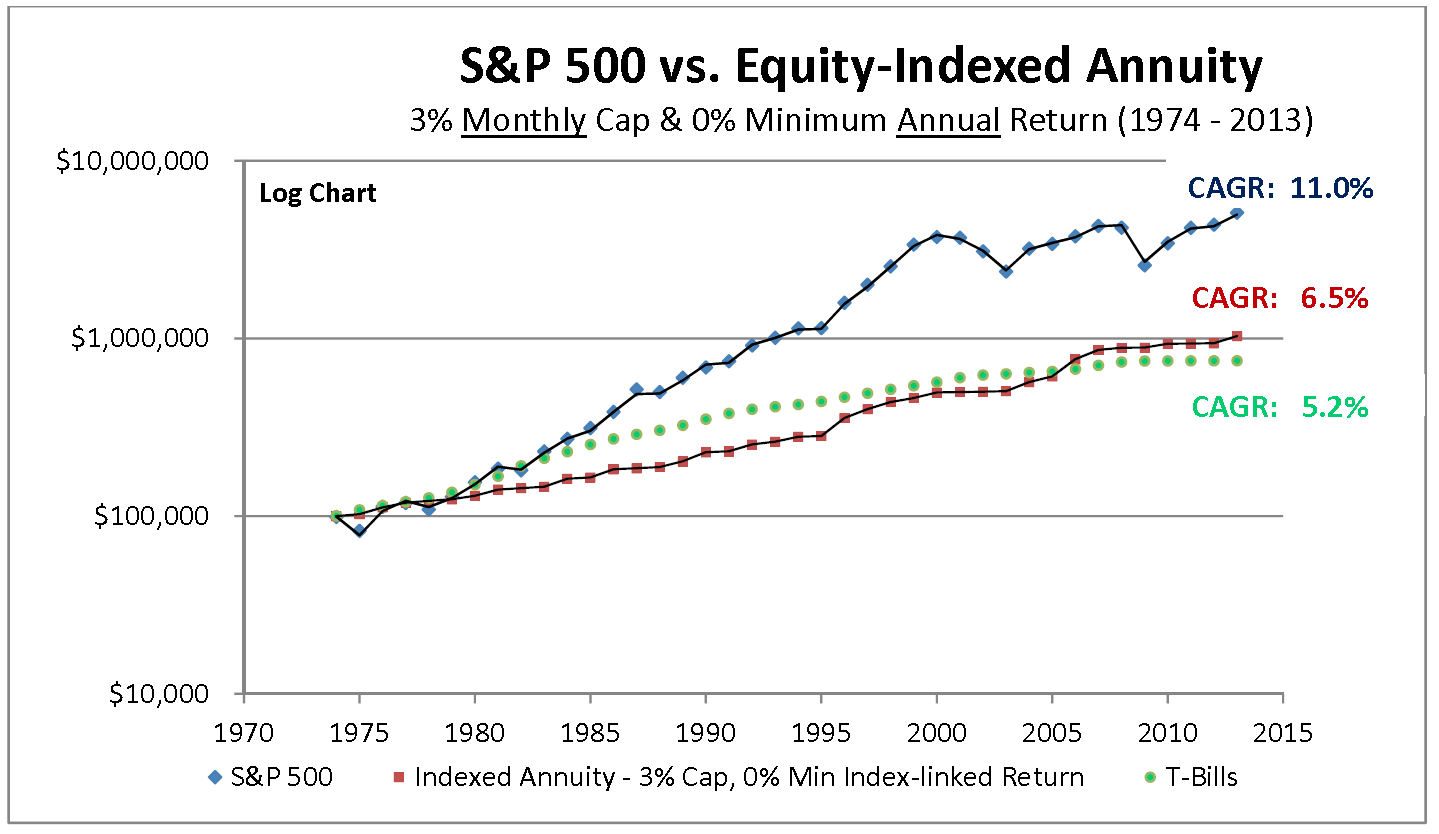 The hypothetical EIA growth line shown in the figure looks strikingly similar to the green‐dot growth path that represents a portfolio invested in Treasury bills. A $100,000 initial investment in T‐bills would have grown at a CAGR of 5.2%, ending with a portfolio value of $750,516.  Note that the T‐bill portfolio outdistanced the EIA over the 1974 – 2005 period, with the EIA moving ahead of the T‐bill portfolio only in recent years, due in part to historically low T‐bill rates. As interest rates in the U.S. economy increase to more normal levels, future relative performance of an EIA may more closely approximate the first 32 years of the sample period than the last eight years.

This study has addressed the key issue involved with equity‐indexed annuities—the tradeoff between volatility risk and rate of return. In short, EIAs often feature much less short‐term volatility than stocks, but typically at the cost of much lower returns. T‐bills, a far less complicated investment, have featured comparable reductions in volatility and return.  However, there are some additional issues with EIAs that were not directly part of this study, but which prospective buyers of annuities should consider.

Using a hypothetical EIA that included representative‐to‐generous contract provisions, my analysis showed that equity‐indexed annuities do appear to offer the promised reduction in volatility compared with stocks. The real question for potential buyers of these products seems to be whether the reduction in volatility is worth the corresponding price paid in lower returns.  One clear observation from this study is that investors interested in an equity‐indexed annuity should recognize that these products are best characterized as insurance policies rather than equity investments. While they do have the potential to capture some of the stock index returns, the caps, participation rates, and other moving parts severely limit that benefit. As one analyst put it, “The upside to an equity‐indexed annuity is that there is no downside. The downside to an equity‐indexed annuity is that there is very limited upside.” With a 40‐year compound annual growth rate that is significantly lower than the S&P 500 and only marginally higher than T‐bills, investors might consider the EIA along with other fixed investment alternatives, but not in the same league with equity investments.

The author of this article is not employed by and does not receive commissions or compensation from any insurance company, and this article is not intended as insurance advice. Further, J. V. Bruni and Company does not sell any insurance products. While it is possible for consumers to receive adequate explanations and recommendations from insurance agents, we feel the case for unbiased and insightful analysis is stronger when consumers are provided appropriate definitions, analysis, comparisons and disclosure unencumbered with industry jargon and sales literature.