Do I Feel Lucky? 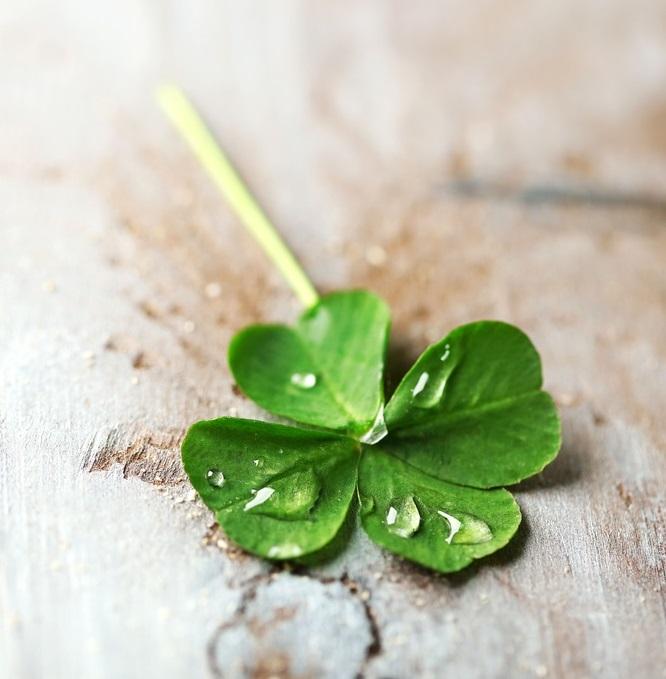 Lately the news seems to include story after story of hedge fund blowups. One of the most recent involved Amaranth Advisors, a Connecticut-based hedge fund whose 32-year-old chief energy trader lost about $5 billion in a single week, cutting assets under management nearly in half. With this trader placing large bets in the volatile natural gas sector from Calgary, Alberta—about 2,000 miles from the Connecticut headquarters—it appears Amaranth was paying insufficient attention to the colossal risk. Stories of fraud or reckless investing make for exciting news, and hedge funds have provided plenty of headline fodder.

While there’s no generally agreed upon definition of “hedge fund,” the term was originally coined by Fortune magazine writer Carol Loomis. In a 1966 story, Loomis used the term to describe the innovative investment strategy of Alfred Winslow Jones, who simultaneously took long positions in undervalued stocks and short positions in overvalued stocks, thereby creating a somewhat “market neutral” portfolio. Jones used the now-common hedge fund practices of leverage and incentive fees, combined in a limited partnership exempt from many aspects of regulatory control. To this day, hedge funds are usually structured as partnerships, with the general partner being the portfolio manager, and the limited partners the outside investors. While hedge funds have been in existence for over 50 years, during the early years of this decade the number of funds and the value of their assets grew substantially.

Today, the term “hedge fund” refers not so much to the actual hedging strategies employed, but to the status of the fund as a private, unregistered, managed investment pool for so-called “accredited” investors. In fact, today’s hedge funds use many different investment strategies, often bearing little resemblance to those employed by Jones or other early practitioners. Like mutual funds, hedge funds pool investor money. However, unlike mutual funds, hedge funds are not required to register with the SEC and are not subject to many of the SEC’s regulations and oversight applicable to mutual funds.

One typical characteristic of hedge funds is their unique fee structure. Virtually all hedge funds charge both a management fee and an incentive (or performance) fee. Management fees vary, but a typical fund charges 2% of assets under management per year—much greater than the management fee charged by most mutual funds. The incentive fee allows fund managers to be paid a share of the profits, with the median share being about 20%. Over 90% of hedge funds utilize a “high water mark,” which allows for an incentive fee only on portfolio assets that rise above the highest previous level of the fund’s asset value. This provision prevents managers from earning incentive fees twice on the same gains in portfolio value.

Combined, management and incentive fees can drag down the net return and reduce the attractiveness of hedge funds. The figure below depicts the cumulative portfolio value for two hypothetical investments compared with the S&P 500: 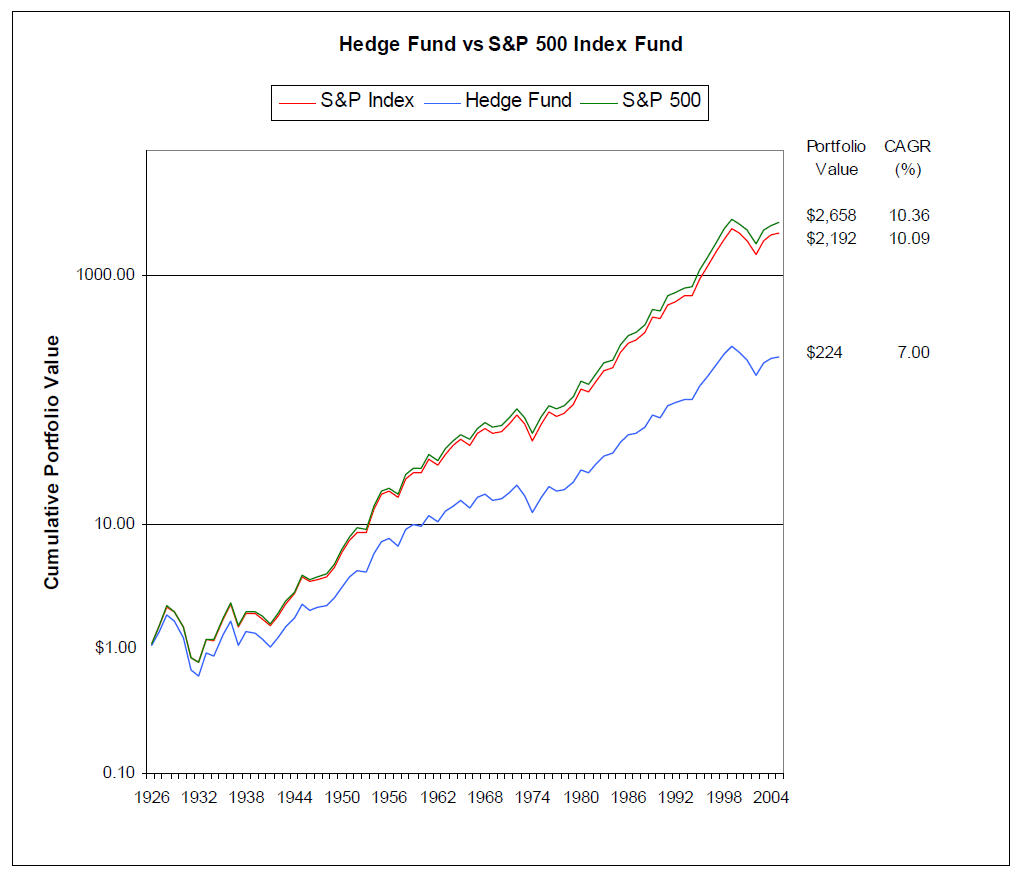 Obviously, given its high fees, this hypothetical hedge fund’s net performance will always be below both the S&P 500 and an S&P 500 index fund. The substantial difference in cumulative portfolio value—$224 for the hedge fund compared with $2,192 for the index fund—is due entirely to the different fee structures associated with each portfolio. While the compound annual growth rate (CAGR) of the S&P 500 over this 80-year period was 10.36% and the index fund averaged 10.09% (net of fees), the hypothetical hedge fund netted only 7.00%.

Given high fees, by how much must a hedge fund beat the market in order to achieve a net return (net of “2 and 20”) equal to that of the S&P 500 or an S&P 500 index fund? My calculations indicate that a hedge fund charging fees of 2-and-20 and using a high water mark, would have had to beat the market before fees by about 3.9% each year from 1926–2005 just to earn an after-fee rate of return equivalent to the S&P 500. To match the rate of return (net of fees) of the S&P 500 index fund, a hedge fund would have had to beat the market by almost 3.6% every year. Thus, based on historical market performance, a hedge fund with a 2-and-20 fee structure would have needed to achieve a compound annual growth rate of about 14% to net a return that compares favorably with the S&P 500. This is no trivial task! In fact, history would suggest that it’s a long shot. 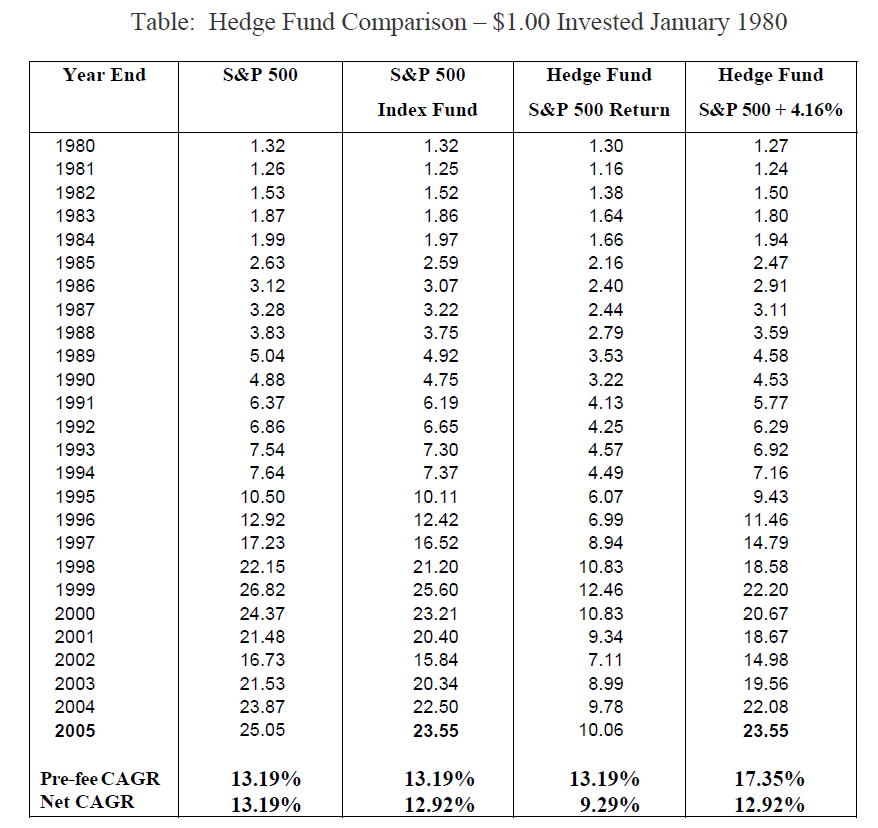 So what do we know about actual hedge funds? Have they been able to beat the market sufficiently to outperform the benchmark S&P 500? Unfortunately, due to minimal reporting requirements, the data on hedge fund performance are limited.  Anecdotally, we read about remarkably high returns in some cases, and fraud, mismanagement, or bankruptcy in others. While some hedge fund indices do exist, many experts believe the data on hedge funds suffer an upward bias due to incomplete or faulty reporting methods. Adjusting the reported returns to correct for bias, Yale economist Roger Ibbotson and Peng Chen of Morningstar estimated that between January 1995 and April 2006 the compound annual growth rate for hedge funds was approximately 9% (net of fees), which was significantly below the 11.6% S&P 500 average for this period. In another study,  Princeton economist Burton Malkiel and Atanu Saha of Analysis Group reported in the Financial Analysts Journal that, adjusting for bias, the hedge fund universe had an 8.82% annual rate of return from 1995–2003 (net of fees), again below the S&P 500.

Before becoming hedge fund investors, most people would be wise to consider the advice movie cop Dirty Harry offered the crooks who found themselves looking down the barrel of his .44 Magnum: “You've got to ask yourself a question: Do I feel lucky?” Given the high fees and the lack of complete performance information, it may require some exceptionally good fortune to select hedge funds that can beat the market over time. As Malkiel and Saha concluded, “…hedge funds have returns lower than commonly supposed … [and] investors in hedge funds take on a substantial risk of selecting a dismally performing fund or, worse, a failing one.”