Coming to a (Tax) Realization 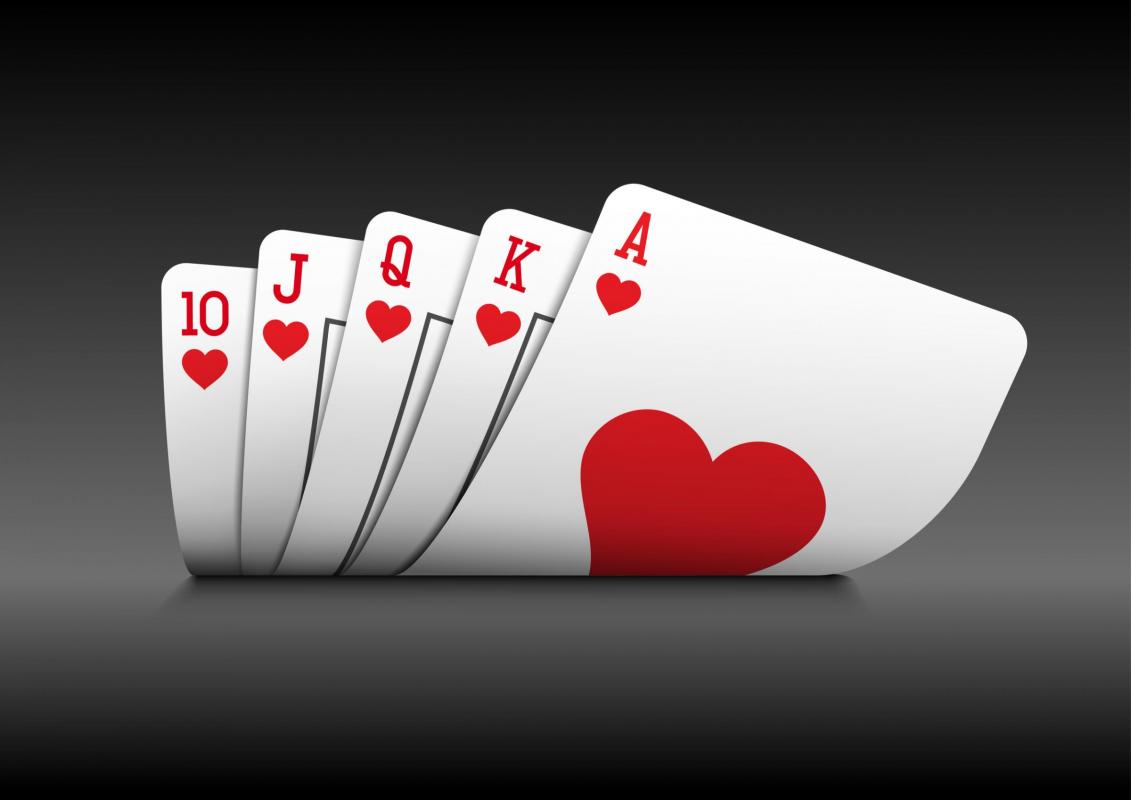 Ben Franklin said that nothing is certain but death and taxes.  Two hundred years later, both are still certain—and we put them off if we can!  Given our instinctive desire to postpone taxes as long as possible, it may surprise you to learn that when it comes to capital gains taxes, paying now instead of later is sometimes a wise decision.  If you hang onto a poor investment primarily to delay paying taxes, you may lock yourself out of better returns that could quickly outweigh the apparent savings.  In the words of singer Kenny Rogers, "You've got to know when to hold 'em and know when to fold 'em."

Long-term capital gains, the appreciation of assets that have been held for more than a year, remain unrealized until a sale occurs—only then is the gain realized and taxable.  For many years, Congress has attempted to spur investment activity by imposing lower tax rates on long-term capital gains compared to ordinary income, and the current 15% rate is the lowest since 1933.  I bet you feel better about taxes already, don't you?

Despite the warm-fuzzy feeling we all get thanks to the historically low rate, some investors remain reluctant to realize a capital gain—and "realize" a tax liability.  In some situations this reluctance is justified, in other cases maybe not—and recognizing the difference is critical.  Here are two key guidelines:

How do you know when to hold 'em and know when to fold 'em?  I think it will help to first clarify what you own—and what you don't—in a growing portfolio.  Chart 1 summarizes the investment performance of $100,000 growing at 10% per year. 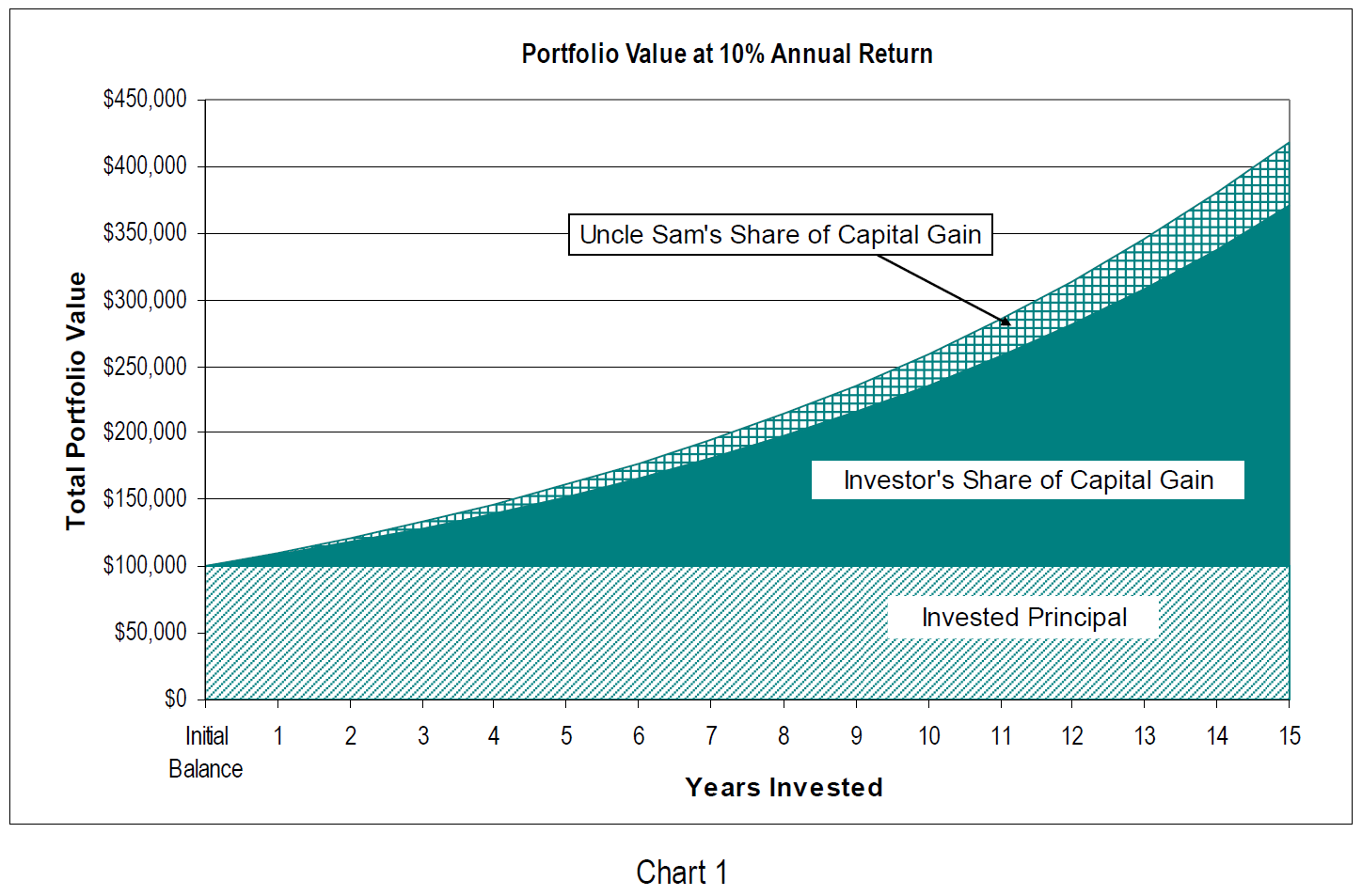 As you can see, the portfolio's total value is comprised of three components—the invested principal of $100,000, your share of the unrealized capital gain and Uncle Sam's share of the unrealized capital gain.  As the portfolio grows, so do both your portion and the government's, even though it can be easy to believe that you own it all until the moment when you actually sell.  Therein lies the trap—basing decisions on the value of something you don't really own.  So let's focus on what really counts—after-tax value—by removing the government's share, as I've done in Chart 2.  I've also merged the principal and net capital gain, since you own it all. 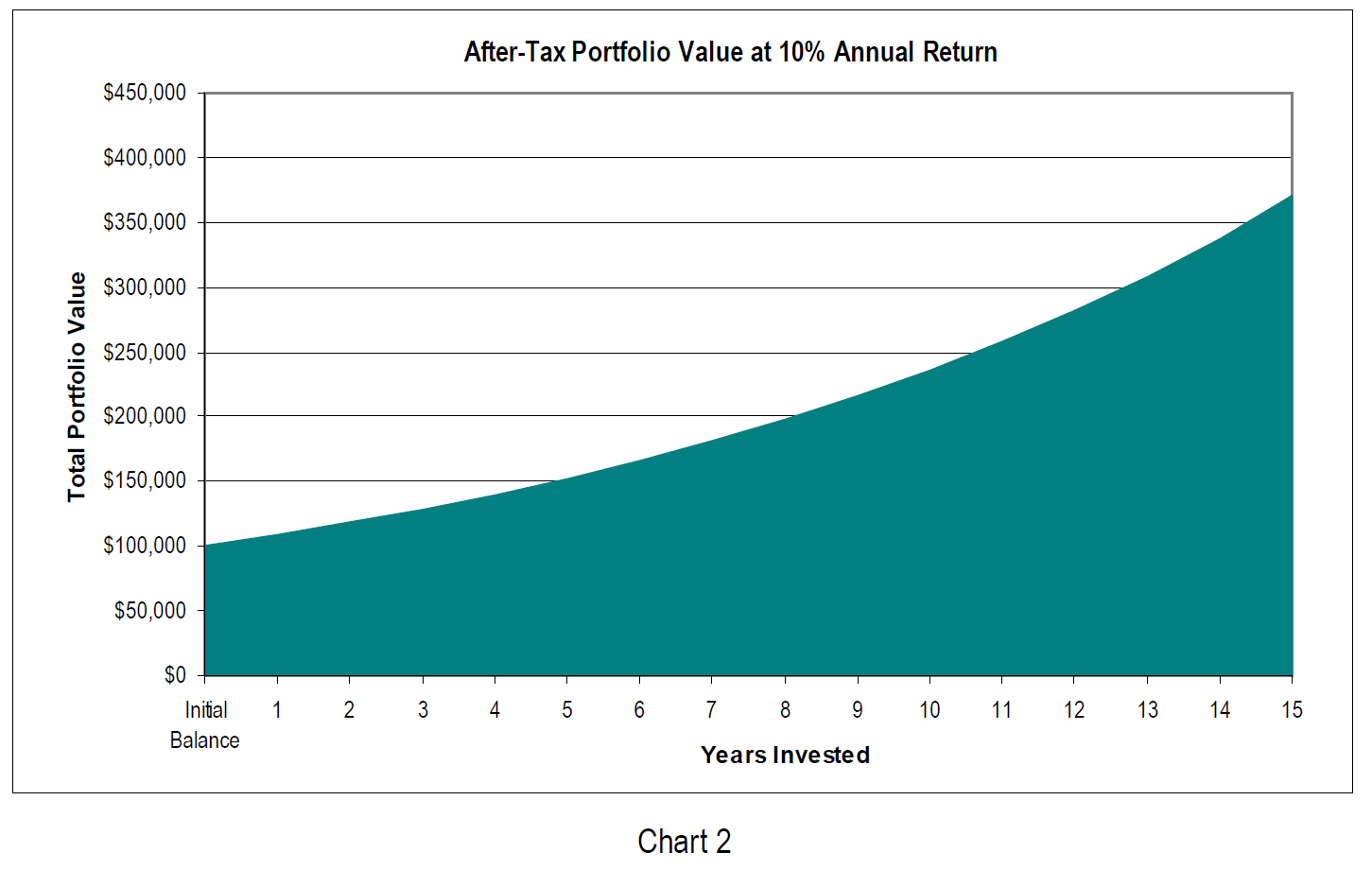 Most investors grudgingly acknowledge the government's stake in their investments even if they'd prefer not to.  Sometimes they don't want to realize a capital gain because they know that they'll also "realize" an unwelcome tax liability.  When is this a smart line of reasoning?

The explanation is simple:  Money withdrawn from the portfolio—and used to pay taxes—won't continue to grow.  Since a picture is worth a thousand words, let's use one to see what happens to your after-tax portfolio value if you sell after five years, pay the capital gains tax, then reinvest the net proceeds at the same 10% rate of return.  The result, as Chart 3 reveals, is a wedge of forfeited return. 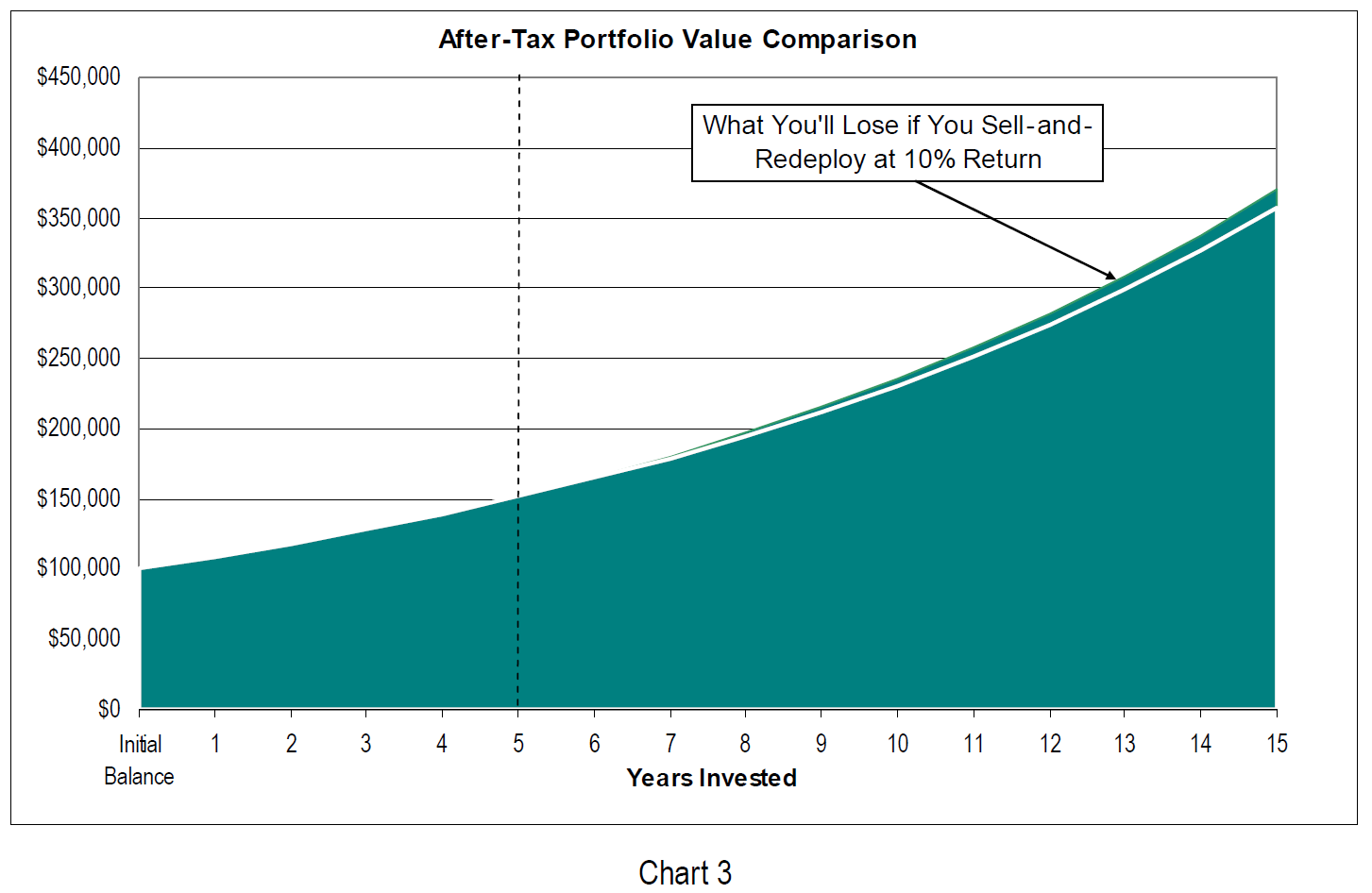 Clearly, your portfolio would suffer for not having earned 10 more years of growth on those tax dollars.  The after-tax value of a sell-and-redeploy strategy never gets as high as a buy-and-hold strategy if the before and after-reinvestment returns are identical.

So why not just hold this portfolio indefinitely—continuing to postpone tax payment?  Here's the clincher:

Let's overlay the results of redeploying your after-tax dollars at a 12% annual return— shown in blue in Chart 4. 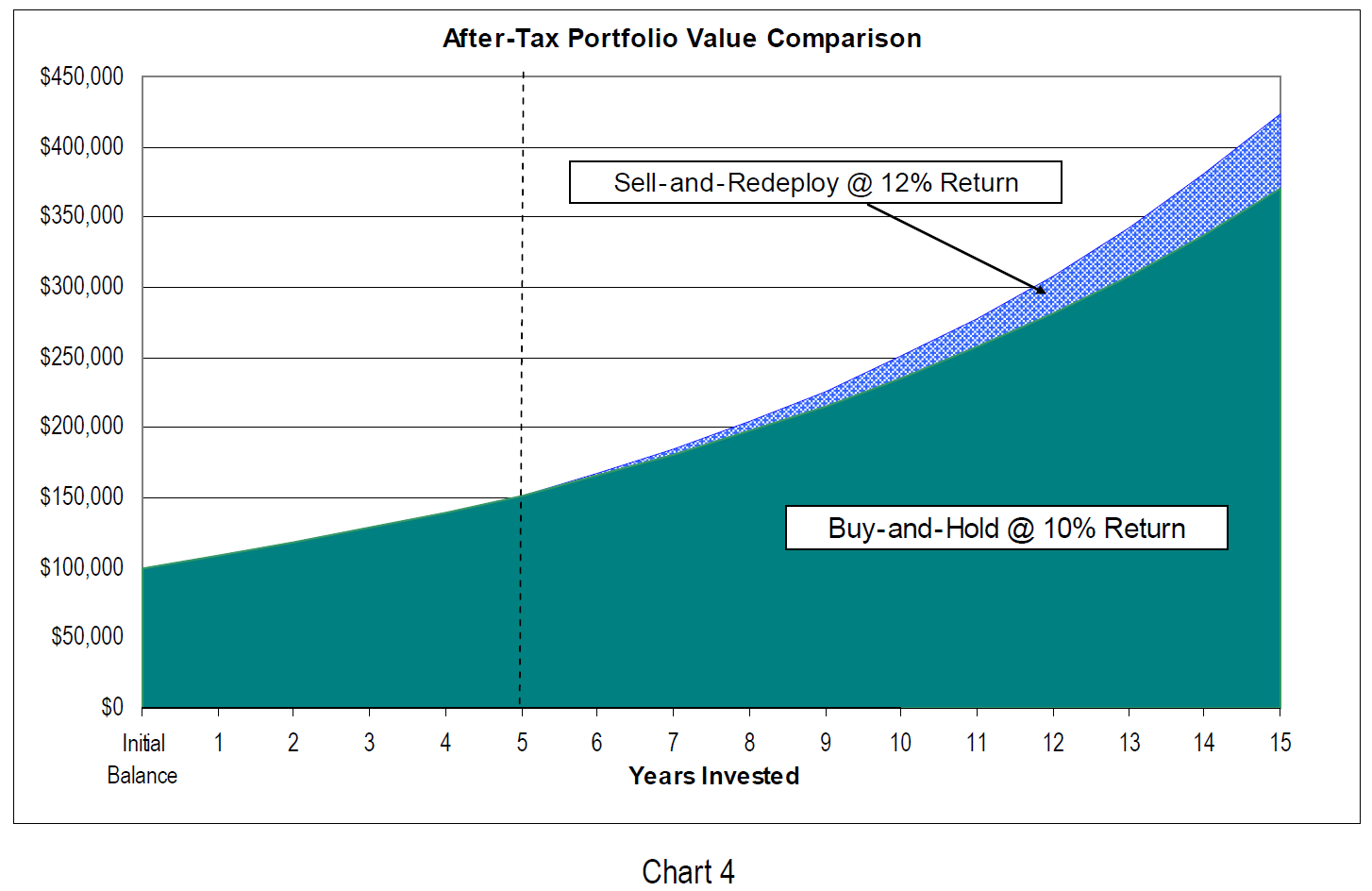 The after-tax value of a portfolio growing at 12% per year quickly surpasses that of a portfolio growing at 10%.  Even though you've forfeited future growth on the tax dollars, compounding the rest of the portfolio at a higher rate of return quickly makes up for the absence of those funds—something that didn't occur when you reinvested at an identical rate of return.  Viewed from the apples-to-apples perspective of after-tax value, anyone would choose to earn 12% rather than 10%, right?  The decision seems harder if you try to choose between the pre-tax value of your current investment and an after-tax alternative—an apples-to-oranges comparison.  It's easy to pretend that you own it all before a sale, but nearly everyone sells eventually.  If you focus on the meaningful measure of portfolio value—the portion you get to keep—the right decision is easier to make.

Since future equity performance is uncertain, you would typically make the decision to sell an investment and redeploy the proceeds only when you anticipate significantly higher returns.  However, even if you earn only a slightly better return, it's still likely that you'll come out ahead.  In the example we've been using (buy-and-hold at 10% versus sell-and-redeploy at a better rate after five years), if your new portfolio returns only 10.5% per year, you'll be ahead—after taxes—in four years.  If the new portfolio earns 12% per year, you'll be better off after only one.

Here's a final thought—since the current capital gains tax rate is the lowest we've seen in our lifetimes, gains realized on future investment sales may be hit with a higher tax rate than the current 15%.  Tweaking Ben Franklin's "death and taxes" comment, Will Rogers quipped, "The only difference between death and taxes is that death doesn't get worse every time Congress meets."   Keep that in mind.